On Memorial Day weekend, we headed up to the eastern Sierras to look for some target birds. I’ve birded the eastern Sierra Nevadas many times, but eBird reports led us to some new places for me. The scenery was spectacular, and the panorama function of my Panasonic Lumix G6 was begging for a tryout. Among the several I took were this stunning view of The Minarets (above) from Minaret Summit near Mammoth Mountain Ski Area. The Minarets are the cluster of needle-like peaks just right of center in the image.

Another interesting collection of panoramas come from the tufa (not tofu) formations. They are accessable at South Tufa on the south shore of Mono Lake. Tufa is limestone (calcium carbonate) rock that forms when underwater springs emit calcium-rich water into the lake water which is full of carbonates. The calcium carbonates precipitate out of the water, settle on the lake bottom and start piling up around the springs.

Since the tufa towers grow only underwater, you can see how high the lake level was before 1941.  That was when the Los Angeles Department of Water and Power (LADWP) started diverting water from the streams that feed the lake. By 1995, the water level had dropped over 40 feet, turning islands into peninsulas that allowed predation of nesting birds by both mammals and reptiles. With the help of litigation and lobbying, the courts and the State Water Resources Board have ordered partial restoration, bringing the water level up 15 feet within 20 years. 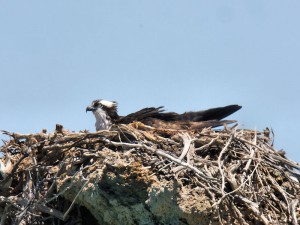 If you look closely at the leftmost tufa tower, you will see a little bump. Closer inspection with my Kowa TSN-884 spotting scope revealed this Osprey on a nest atop the tower. I digiscoped some photos of the Osprey at a distance of about 450 feet. This photo is uncropped so you can get a sense of what is possible with a top digiscoping setup.