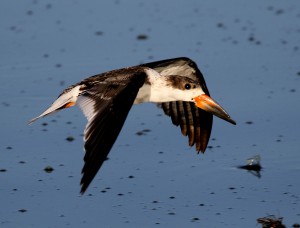 A sub-adult Black Skimmer close-up over a pond at San Joaquin Wildlife Sanctuary in Irvine, California

The Black Skimmer (Rynchops niger) is a  wonderful weird bird that breeds across the southern half of North America. Black Skimmers live and forage almost exclusively at coastal locations or within about 20 miles of the shore. They are primarily year-round residents here, though some winter as far south as the Yucatan. A large population of Black Skimmers resides year-round in a range roughly corresponding to the entire Amazon drainage basin.

Black Skimmers are easily recognizable by their bizarre asymmetric bill, longer below than above. Black Skimmers have clean white underparts, throat, neck collar (non-breeding only) and around the bill. Their feet and the inner bills are bright orange; the tips of both mandibles are black. Juvenile Black Skimmers are more brownish-gray on the upper surface, and have relatively dull orange feet and inner bill parts. At birth, juvenile skimmers mandibles are of equal length. But by the time they fledge four weeks later, the lower mandible is a centimeter longer than the upper one. 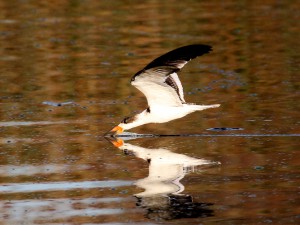 The Black Skimmer is “our skimmer” in that it is unique to the Western Hemisphere. There are two other species of skimmer worldwide: the African Skimmer (Rynchops flavirostris) and Indian Skimmer (Rynchops albicollis). African Skimmers are classified as near-threatened, with a population of 15000 – 25000 individuals. The most endangered skimmer species is the Indian Skimmers. Only 6000 – 10000 individuals remaining in the world, and they face a variety of threats. By contrast, environmentalists list Black Skimmers as a species of “least concern”, estimated at 65000 – 70000 breeding birds. Taxonomists classified the Black Skimmer as a type of tern for several hundred years. Then modern research indicated that they belonged in their own group. Taxonomist still classify skimmers in the large order Charadriiformes, tucked between the terns and the auks. 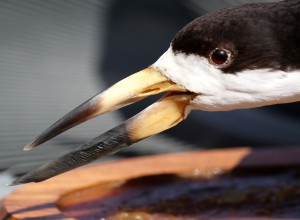 What makes skimmers particularly interesting is their way of feeding, using that unusual bill. A skimmer sticks the lower bill into the water like a plow as it flies low over the water’s surface. The knife-edged shape of the skimmer’s lower bill offers little resistance to the water. When the lower bill strikes prey near the surface, the skimmer snaps the bill shut, pinning it between the mandibles. Slow motion clips show the bird actually compressing its neck inward and ducking to secure prey.

The skimmer flies quite slowly using shallow wing beats to hold the bill steady in the water. This mode of flight makes the skimmer incredibly graceful in motion, and also an irresistible subject for photography. This method of feeding is completely tactile so that the birds can feed in near complete darkness. They are often visible doing so after dusk when they appear as dark blobs cruising low over the water. All three skimmer species feed by this means. Simply incredible! 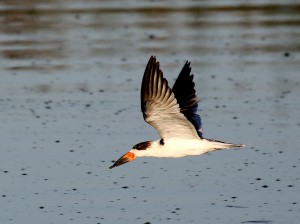 A sub-adult Black Skimmer in flight over the pond

Skimmers breed colonially, crowding together on beaches. There they scrape shallow nests in the sand and lay broods of up to 4 eggs. After using their feet to kick sand aside, they sit in the hole and rotate to widen it. This makes a shallow, cone-shaped nest, averaging about 10 inches wide and one inch deep. Black Skimmers often nest with other birds such as gulls and terns. Within these multi-species gatherings, they congregate together, forming dense, dark patches among their paler gray and white relatives.

Black Skimmers are often quite vocal, especially in flight, where they communicate with low-pitched, nasal, calls and chuckles. Juveniles use a slightly different tone (more whiny!) while they follow their parents around begging for food. My kids did this too, so it’s not unique behavior! Even when not nesting, skimmers prefer to cluster together to roost, preferring beaches or islands to sit on. Black Skimmers may live a long time: the oldest known individual reached an age of 23 years in California.

Here in Orange County, California the largest nesting colony of Black Skimmers is at Bolsa Chica Ecological Reserve. That colony exceeds several thousand pairs. You can find skimmers in Upper Newport Bay, at the San Joaquin Wildlife Sanctuary, and up the Santa Ana River. Black Skimmers breed in a small colony at Anaheim Shores. Skimmers leave during fall and winter, so the best time to see them is late spring and summer. So do yourself a favor and go check out these wonderful, bizarre and yet beautiful and graceful birds.