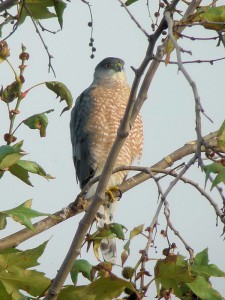 A Cooper’s Hawk checks out the Pancake Breakfast

At a recent Sea and Sage Audubon Pancake Breakfast, we found this Cooper’s Hawk right on top of us! This year?s event on  got off to an inauspicious start with the rain pouring down at 6:15 am. Fortunately, the rain mostly stopped by 6:45 and a little later, dramatic clouds gave accent to beautiful blue skies. Evidently enjoying the warmth, this Cooper’s Hawk chose a sunny perch for itself. Since we already had the Leica Apo-Televid 82 spotting scope set up, it was a matter of 10 seconds or less to drop the Leica D-Lux4 digital camera into position and begin snapping away. As it turned out, haste was unnecessary as the bird sat quite obligingly for some time.

Cooper’s Hawks are relatively common resident raptors here in southern California. Though at this time of year, there is potential for confusion as Sharp-shinned Hawks  migrate through the area. 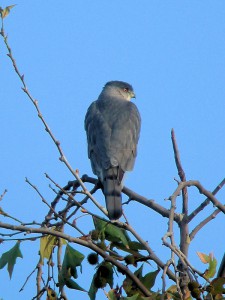 Unfortunately, a picture like this conveys little idea of scale, but there are a few clues. First, this bird has a relatively large head; Sharp-shinned Hawks have proportionately smaller heads. Second, this bird exhibits a mostly-rounded tail. While not an infallible field mark, generally “Sharpies” show more squared tails. This is because their tail feathers have more uniform length. This bird is clearly an adult, as attested by the rust-red barring on the chest. Note the bluish-gray color of the back and upper tail and the bright red eye. Juveniles are warm brown in their upperparts, with brownish streaking against a pale chest, and a yellow or yellow-orange eye.

When the hawk flew to the top of the sycamore before leaving, it presented exposure problems for photography. He sat only briefly, peering this way and that. After compensating for the bright background, I squeezed off a few more shots. This Cooper’s Hawk provided a lovely demonstration subject for the speed and versatility of this Leica digiscoping outfit, and when I showed off the photos, more than one person said “Wow!” That’s what we like to hear!