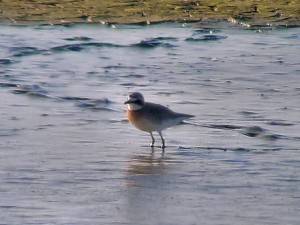 Discovery of the Lesser Sand-Plover

Local cell towers began vibrating early last Saturday morning with the news that a local birder discovered a Lesser Sand-Plover at the extreme south end of Bolsa Chica Preserve in Huntington Beach, Orange County, California. The 11th state record, this Lesser Sand-Plover was a first for the county, and a life bird for many potential viewers. What followed was the usual scramble as people who could, dropped everything and barreled towards the spot. Those of us who couldn’t (and we sympathize as we numbered among them) watched the email boards in agony.

When news of a Peregrine Falcon incident broke (the moan was almost audible county-wide) and the search for it in Bolsa’s inner bay began. At 10 AM, the Lesser Sand-Plover reappeared briefly, then flew off again and disappeared. Then late that afternoon, confirmation arrived that it returned where initially appeared, pushed south by the rising tide. 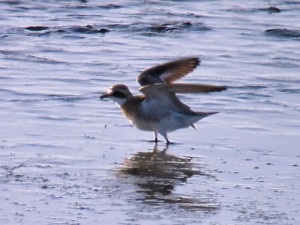 Getting to Harriet Weider Park

At that point, we were finally able to do something useful about it. So we each packed a different digiscoping rig and headed for Harriett Wieder Regional Park. This spot overlooks the vast mudflats the bird frequented by the Lesser Sand-Plover. The location presented a challenge as there is no close approach to the birds. Worse, the flocks roosted almost 150 yards away, and the light came from behind the birds there in the evening. It wasn’t a question of taking publication-worthy photos; in this case, that was never a rational possibility. What we hoped for was documentation quality shots, and to that end, we were all gratified with some success. 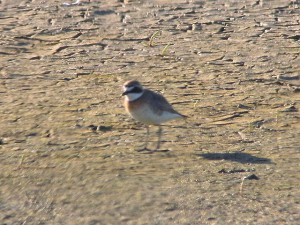 People ask why you would bother with digiscoping; the Lesser Sand-Plover was a perfect example of why you would. Only distant views were available. The distance was well beyond the ‘reach’ of a superzoom camera or a DSLR with a conventional long lens. No closer access was available to anyone without a special permit to enter that section of the park. Only the 1000-4000 mm equivalence of digiscoping allowed us to obtain even passable images under these circumstances. The bird spent long periods of time unmoving, allowing us to take many exposures. We could even adjust to compensate for the challenging lighting in between without hurrying. When it emerged from its resting spot among the pickleweed, the camera shutters went off like machine guns! And everyone there was digiscoping. When we finished shooting, we went back to just enjoying this spectacular bird.

Judge the results for yourselves. Using three different cameras and spotting scopes from two different manufacturers, we took a great many shots. A little digital editing, and this is what we got: shots that more than suffice for documentation. No, these won’t grace the cover of any glossy birding magazines. Still they are plenty good enough to confirm the bird as a Lesser Sand-Plover.  And what a bird!