Most of us are aware of the famed Mission at San Juan Capistrano. More accurately, most people are aware of the return of thousands of swallows during the month of March. March 19th or St Joseph’s Day was the schedule for this event. Today there are very few swallows actually nesting at the mission is the real truth. As a result of the 1812 earthquake much of the roof collapsed. Now left bare and exposed are the two-story arches of the great stone church. During reconstruction the nests were removed to protect the swallows. As luck would have it, the swallows moved to other adjacent locations and created new nests. Few have ever returned to the mission. 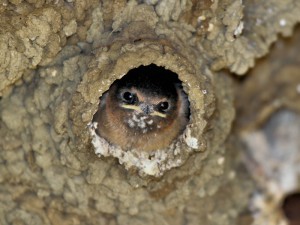 The fabled swallows of San Juan Capistrano still arrive in the area every year though most of their nests are under local bridges or often under the eaves of local establishments. The photos here are from the nearby Tree of Life Nursery adjacent to Casper’s Regional Park. Located off Ortega Hwy it is about 15 minutes east of the mission. (Young looking out of its nest shown on the left)

As a naturalist and bird watcher it seems unlikely to me that their arrival date was always exactly consistent. Their scheduled arrival was on March 19, the morning of St. Joseph’s Day. Then their departure was on The Day of San Juan, October 23rd. This was probably more of an approximation than rule. Still, these dates are fair general timing for these little world travelers. At their fall departure these little swallows head for their winter home in Argentina! 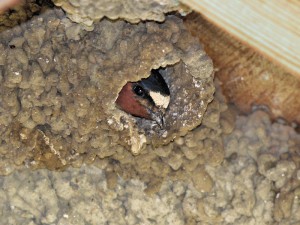 The swallows, more precisely Cliff Swallows, have many more surprises than just their extensive travels. They are very social and live mostly in colonies. These colonies can number as many as 3,700 nests in one location. Although more numerous in the west, they range across the US. As a co-operative species, during poor weather conditions the bird makes a specific call that alerts the other swallows. This call alerts the colony of the presence of bugs – their primary food. The other members of the colony will subsequently follow the member that discovers the food. (Adult looking out of its nest shown on the right)

Both male and female Cliff Swallows build their nests. The male may start building before actually attracting a mate. The female lays 1 to 6 eggs. Both parents incubate the eggs and feed the young. It is a fairly quick hatch of usually in under 19 days. One of the interesting details is that sometimes the adult will lay an egg in another swallow’s nest. It may even take one of its eggs and move it over to another swallow’s nest. The care of the young is done by both parents or the “adopting parents” which continues for about five days after the young fledges. In such large flocks it would seem difficult to know who were your chicks. The young are indeed recognized by the adults by their call.